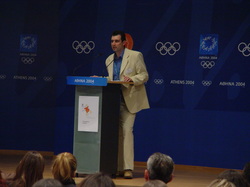 Olympic Games – Volleyball
Draw completed for men’s and women’s competitions
Athens, Greece, June 7, 2004 – China v U.S.A will be the feature women’s match on the opening day of the Olympic Games Volleyball competition in Athens, Greece following the Drawing of Lots ceremony held at the ATHOC headquarters here on Monday.

For the women’s draw, which starts on August 14, the 12 teams qualified are split into two pools. In Pool A is Greece, Brazil, Italy, Japan, Korea and Kenya while in Pool B is China, U.S.A., Russia, Cuba, Germany and the Dominican Republic.

For the men’s draw, which starts on August 15, the 12 teams are also split with Pool A consisting of Greece, 2000 Olympic champions Serbia and Montenegro, France, Argentina, Poland and Tunisia. In Pool B, Brazil, Italy, U.S.A., Russia, the Netherlands and Australia are together.

Along with the China-USA clash, which is the world No 1 team v the world No 2, the other opening women's Pool B matches see 2000 Olympic champions Cuba take on Germany while Russia plays the Dominican Republic.

The first day of the men’s draw sees Greece play Tunisia, Argentina take on France and Serbia and Montenegro play Poland in Pool A. While in Pool B, Brazil play Australia, Italy play USA and Russia take on the Netherlands. 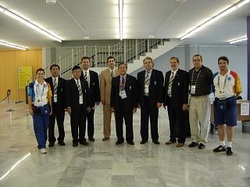 Olympic Games preparation right on track Lausanne, Switzerland, March 04, 2004 - A delegation from the International Volleyball Federation (FIVB) consisting of the General Manager Mr Jean Pierre Seppey and FIVB Controller Mr Franz Schmied returned on Thursday from a successful three-day inspection visit of the Volleyball and Beach Volleyball facilities for the 2004 Olympic Games in Athens returning to Lausanne, Switzerland extremely pleased with the progress of work on all of the facilities and the cooperation of the Athens Organising Committee (ATHOC).

The progress of preparation of the sporting facilities for the Athens Olympics has been a concern leading up to the Games but following three days of meetings, inspections and discussions this week, Mr Seppey confirmed only a few details were still to be completed and all facilities for Volleyball and Beach Volleyball are well on track.

"ATHOC has worked very hard to meet the requirements of the FIVB and a lot of credit must go to them for their fantastic attitude towards making sure everything is in order for Volleyball and Beach Volleyball by the time the Olympic Games begin in August," Mr Seppey said. "Our time in Athens this week has been very valuable and we have come away very happy knowing virtually everything is in place to make sure Volleyball and Beach Volleyball will be great success come August".

"The meetings with the FIVB this week were very positive and constructive and we managed to solve a number of issues," Mr Beligratis said. "We have now confirmed the final objectives and we are looking forward to making the sports of Volleyball and Beach Volleyball successful in all departments".

The Olympic Games in August is the highlight on the FIVB calendar this year and the meticulous preparation and detail that goes into making sure everything is ready reflects the status of the event. Volleyball first became an Olympic sport in 1964 in Tokyo, while Beach Volleyball made its first appearance in 1996 in Atlanta.